In the real world there are groups which composed of independent units. The conventional data envelopment analysis(DEA) model treats groups as units, ignoring the operation of individual units within each group.The current paper, investigates parallel system network approach proposed by Kao and modifies it. As modied Kao" model is more eligible to recognize ecient groups, a new ranking method is proposed based on a model which calculates eciencies with additional constraint that made model share constant ineciency among groups.To show advantages, modies model is applied to eciency calculation of both articial and real groups and results is compared with conventional DEA model and parallel system network model as well.Finally it is shown by tow numerical and empirical examples that ecient groups recognized by modied model how can be ranked according to proposed ranking model. 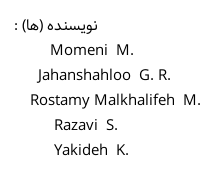