‎In the present analysis‎, ‎we study the boundary layer flow of an incompressible viscous fluid near the two-dimensional stagnation-point flow over a stretching surface‎. ‎The effects of variable thickness and radiation are also taken into account and assumed that the sheet is non-flat‎. ‎Using suitable transformations‎, ‎the governing partial differential equations are first converted to ordinary one and then solved numerically by fourth and fifth order Runge-Kutta-Fehlberg method with shooting technique‎. ‎The influence of the various interesting parameters on the flow and heat transfer is analyzed and discussed through graphs in detail‎. ‎Comparison of the present results with known numerical results is shown and a good agreement is observed‎. ‎It is found that boundary layer is formed when $\lambda > 1 $‎. ‎On the other hand‎, ‎an inverted boundary layer is formed when $\lambda < 1 $‎.‎ 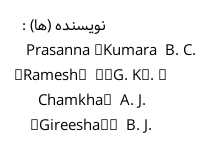